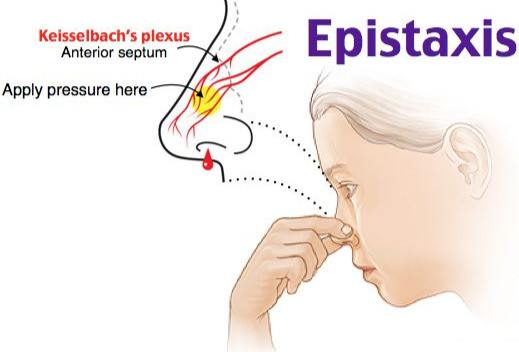 Epistaxis is characterized by hemorrhage or bleeding from the nose.
While the majority of the nose bleedings are self-limiting, those not responsive to
compression, nasal packing or other non-endovascular treatment options may need
endovascular management. This especially holds for bleeding from the backside (posterior
cavity) of the nose.
This article will talk about the management of the epistaxis in the posterior nasal cavity and
its management.

Some common causes of epistaxis include:

However, in some cases, the cause of nose bleeding may not be known.

Along with conventional measures, posterior nasal cavity bleeding needs anterior and
posterior packing to provide adequate compression. It also prevents the bleeding from
entering the food pipe.
However, this packing needs removal after 48 hours to prevent infection and other
complications.

In cases of recurrent or persistent epistaxis, endovascular management is an excellent option
with a success rate between 71%-100%. It is also a cheaper and comparatively safer option as
compared to surgery.
Your doctor will decide the need for general anesthesia based on your problem and the
underlying cause. They may advise blood tests to find out the underlying cause.
The next step is angiogram and embolization. The doctor will first carry out an angiogram for
evaluating your blood vessels. They will introduce an embolizing agent in the branches of the
blood vessels, causing epistaxis.
The doctor will take extra care in deciding the amount of embolizing agent as an additional
amount may result in blockage of the healthy blood vessel.
After the procedure, the doctor will decide to remove the nasal packaging depending on the
condition

About 95% of the epistaxis originate in the anterior nasal cavity and can easily be managed
with packaging and compression. However, the remaining 5% of the cases originate from the
posterior cavity and are more challenging to manage, needing endovascular treatment.
Endovascular embolization is a safe and effective option compared to surgery.