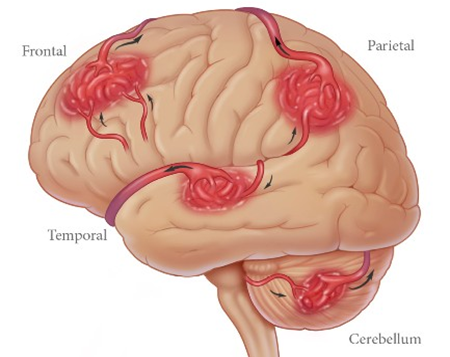 Dural arteriovenous fistulas (d-AVFs) are malformations caused by abnormal connections between your artery and vein in the dura, an outer covering of the spinal cord or brain. These malformations usually appear later in life and are not seen to have a genetic tendency.
While there are many causes for these d-AVFs, blockage or narrowing of the brain’s venous sinuses is among the commonest causes.

Some patients with dural AVFs may not have any symptoms. But when present, they can be classified as benign or aggressive symptoms.
Aggressive symptoms
These symptoms can be due to hemorrhage/bleeding in the brain or non-hemorrhaging neurological deficits (NHND). Hemorrhagic symptoms include a sudden headache of varying intensity depending on the size and location of the bleeding.
On the other hand, symptoms of NHND develop gradually and cause symptoms based on its location. Some common symptoms include speech or language difficulty, seizures, dementia, face pain, pricking sensations, coordination problems, and apathy. Pressure symptoms can also be present such as nausea, vomiting, and headache.
Benign symptoms
Common symptoms include pulsatile tinnitus, a bruit behind the ear, and vision problems such as eye bulge, visual deterioration, and swelling in the eye lining.
Symptoms that indicate a medical emergency
If you have any of the mentioned symptoms, seek immediate medical care:

If you have symptoms of dural AVF, your doctor may ask for magnetic resonance imaging (MRI) and non-contrast head computerized tomography (CT).

DSA (Digital Subtraction Angiography / Catheter-based cerebral angiography):
This is the gold standard test to diagnose this condition. It not only can diagnose this but can also helps in making treatment plan and assessing the benign Vs. aggressive nature of this condition.
After the initial CT/MRI scan, your doctor may advise this angiography that will help to define: