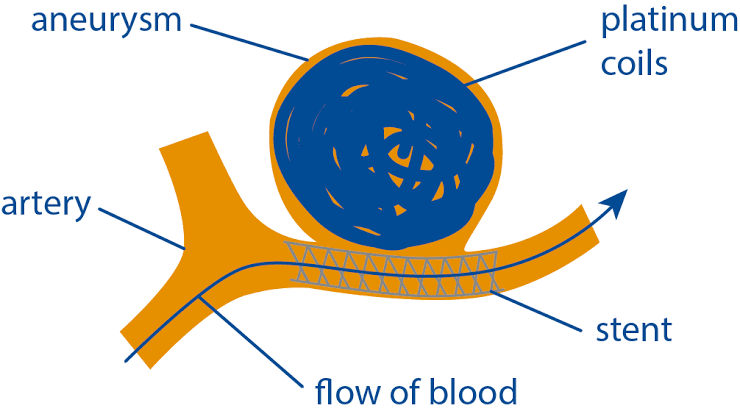 Cerebral aneurysm is an abnormal dilation or bulge or ballooning of an artery in the brain, mainly occurring where the artery divides. Weakening of the muscular layer of the artery makes it susceptible for this abnormal dilation. It may leak or rupture, which causes bleeding into the brain, resulting in hemorrhagic stroke. A ruptured aneurysm is often life-threatening and requires immediate medical attention.

What is Cerebral aneurysm coiling?

Why is Cerebral aneurysm coiling done?

It is an effective treatment for patients having ruptured or unruptured aneurysms. However, it is always done if the aneurysm has already ruptured. Case where bleeding has not occurred the coiling is done after assessing the bleeding risk which depends upon many factors like size/configuration of the aneurysm, age, co-morbidities, medications history etc.

Though the procedure is minimally invasive, it may cause some side effects. The complications associated with the procedure are infection, stroke, seizure, allergic reactions, and bleeding.

After the surgery, you may be shifted to the intensive care unit for further observation and monitoring. If the coiling is done for unruptured aneurysm the hospital stay might be of 3-4 days. If it is after bleeding has occurred then the hospital stay may extend to 10-14 days. The patient may feel mild tenderness in the groin or leg region. Your physician will provide you with specific detailed instructions regarding the post-surgery.

The following set of restrictions are be expected to be given by the surgeon: