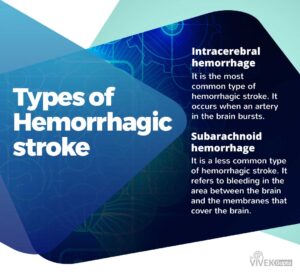 However, the good news is that immediate/early treatment improves the odds of recovery.

Some common symptoms of hemorrhagic stroke are: 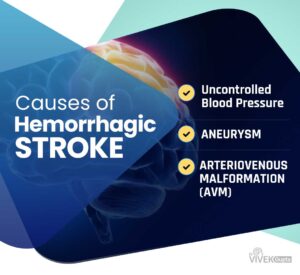 There are multiple causes of hemorrhagic stroke, but the most common ones are:

Treatment for Hemorrhagic Stroke due to Brain Aneurysms

Medical Management
Once the bleeding is there in the brain, patients become very sick and require early hospital admission preferably in a dedicated neuro ICU. Here, medical management is given to decrease the symptoms of bleeding, manage increased blood pressure and in some cases ventilation if the patient has had severe bleeding. In addition to this, the cause of bleeding the aneurysm needs to be treated urgently because there is a very high chance of repeat bleeding.

Your physician may decide the best hemorrhagic stroke treatment based on the condition. Some common options include:

The procedure prevents rebleeding. In this type of treatment, there is no scar over the head and the entire treatment is done through a tiny hole in the groin or wrist. In general, this form of treatment is less risky then open surgery and recovery time is less.

In this form of treatment, the skull is opened up and the brain is separated to reach the site of the aneurysm. Once there the blood flow into the aneurysm is blocked with an aneurysmal clip that prevents it from bursting or bleeding further. Depending on the aneurysm’s size and location, surgery may or may not be a good option.

Both are established treatments for aneurysm treatment. The decision of which modality is better in a given case is based on, location of the aneurysm, size and configuration of the aneurysm, age, existing medical conditions and available local expertise. However, in general, coiling is safer when compared to open surgery in the majority of cases.

Generally, after a ruptured/burst aneurysm is repaired patient would need 10-14 days additional stay in the hospital so that complications arising from blood collected in the brain can be managed. The duration of rehabilitation and recovery depends on the amount of bleeding, tissue damage and the severity of the stroke. You may need different therapies, depending on your needs. Some examples include occupational therapy, physical therapy, and speech therapy.